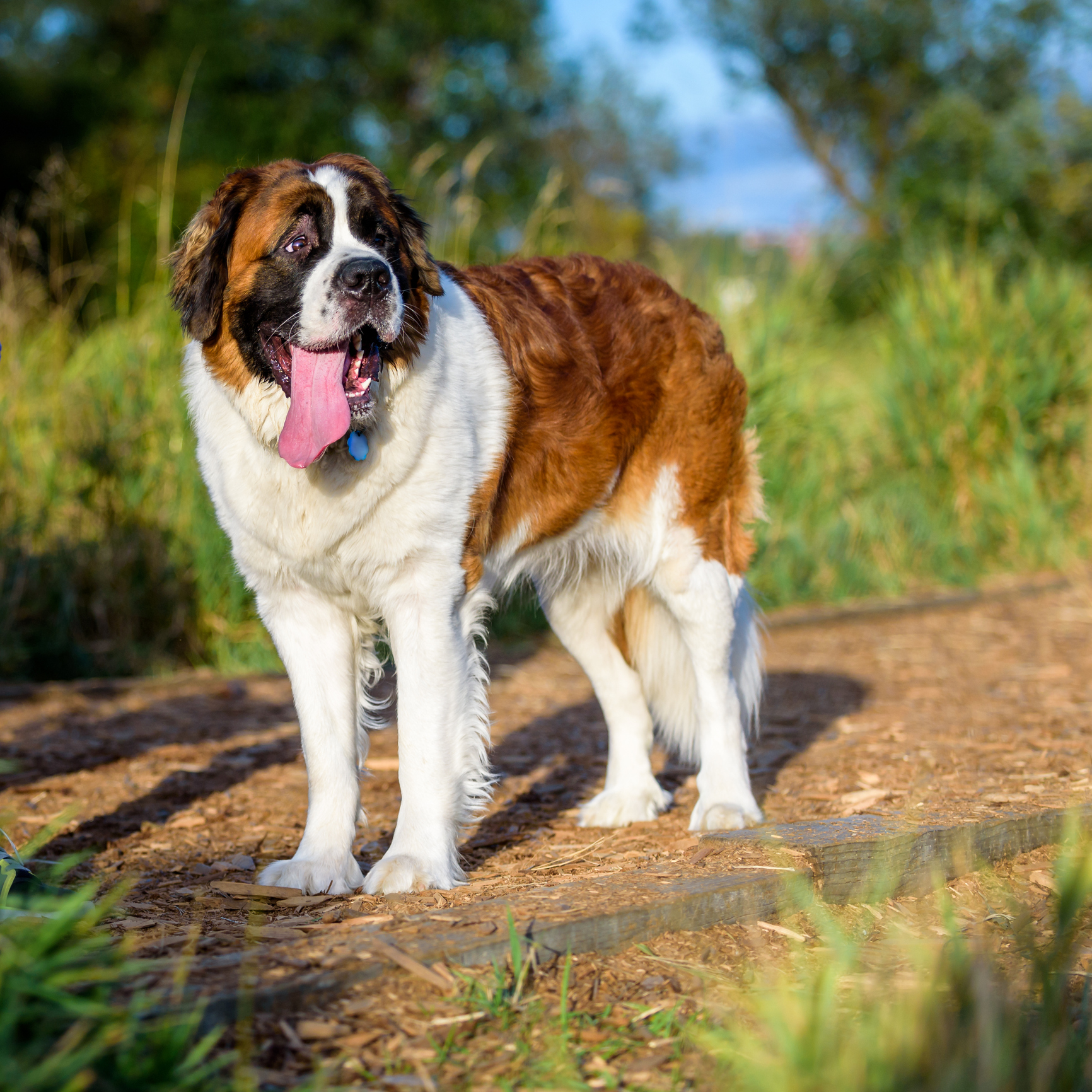 A young St. Bernard and his owner

Origin: Family of Mastiff in Middle Ages. Original function: draft, search and rescue. Today, companion dog. Colors: White with red, red or brindle w/white, (white must be on chest and feet, tail tip and nose band and collar.) The Bernard drools a lot.

The Saint Bernard probably had it’s roots in the Roman Molossian dogs, but it wasn’t until around 1670 that the breed developed into the dog responsible for saving so many lives. Around this time, the first of these large dogs arrived at the Saint Bernard Hospice, a refuge for travelers crossing between Switzerland and Italy. The Bernard’s originally came to help pull carts and may have also worked as watchdogs and companions. Monks soon discovered these dogs were invaluable pathfinders and could work in the deep snow. The dogs were adept at locating lost travelers. When a dog once found a person, he would lick the person’s face top revive him and lie on top of him to keep him warm and alive. The breed continued to serve this way for three centuries and saved over 2000 people from sure death. The dogs got the name “Hospice Dogs” because of their extreme actions in lifesaving abilities.

By 1865, the name “Saint Bernard” was in common use and it became the official name around 1880. Around this time the breed caught the eye of Americans and by 1900 the Saint Bernard was very popular.

Yes, quite trainable. They want to please and do well with clicker training training and positive reinforcement practice. It’s easy to use and effective.

Want to crate train your Saint Bernard puppy? It’s easy and if you’re interested, take a look and you’ll see what to do. Crate training your puppy will save many headaches and problems.

The Saint Bernard puppies are generally easy to house train, potty train, toilet train, housebreak or whatever you want to call it. If you have a puppy, decide if you want to crate or paper potty train it. For the best results, we have a page at Crate vs Paper Potty Training which will help you decide and from there you can get all the information you need to get the job done. Always praise the pup profusely when she goes potty in the RIGHT PLACE so she knows she has done a good thing. Either method will work for this breed.

If you have an older dog, take the dog outside every two hours until she gets the idea which door leads to her potty area. Older dogs catch on to the potty or housebreaking pretty fast once they are shown what to do. Top

The calm, easy-going St. Bernard is gentle and patient around children, although it is not especially playful. This dog is devoted to it’s family and is certainly willing to please, though at his own pace. He can be quite stubborn.

If you happen to get a Malamute with a separation anxiety problem, that can be dealt with by investing a few hours of work on your part and some “tough love.”

Friendly Toward Other Dogs

Gets along fairly well with other dogs. The Saint Bernard is not known to be aggressive but any dog can have likes and dislikes.

Friendly Toward Other Pets

Yes, quite good with household pets. Saint Bernard’s are good family dogs as long as they are in a cold climate. Top

Friendly, generally. Some bad breeders have turned out puppies that grew up aggressive but as a rule, the breed is friendly.

Moderately playful. This is a happy dog.

Yes, the Saint Bernard is a good family dog, friendly, loyal and affectionate

Yes, but keep small children away or heavily supervised as this is a big, heavy dog that can do serious accidental damage. The Saint Bernard is quiet, calm and laid back and tolerant so older kids are okay.

Good with Seniors over 65?

House with plenty of fenced-in space to run around. Can NOT tolerate warmth. The Saint Bernard must have a cold climate to survive.

Moderate. Two daily walks and a short run is enough.

Four Bernards at home in the snow

Long hair. Brush and comb four— five a week (If you don’t, you will have a real difficult mess), wash only when really dirty. Top

In the event you decide to go looking for St. Bernard puppies, be SURE to find reputable breeders that really know what they are doing. Be sure the puppy has been well socialized and started in obedience training.
Saint Bernard Breeders with puppies for sale.

In the event you are seriously considering the adoption of a St. Bernard and are looking for a Saint Bernard Rescue group or groups in your state, here are several links that might help:
Petfinder – Dog Rescue – (Nationwide) Petfinder is showing only around 500+ St. Bernard’s available nationwide at the time of this writing. You may need to surf the web for Saint Bernard Rescue locations, check local newspapers for shelters and look for any dog pound available. If you do adopt, look for dog health papers as they could be useful in the future.
Adopt A Pet This is an interesting site but you still may have to go online and look for Saint Bernard Rescue groups or foster homes, kennels or pounds. The St. Bernard is hard to find.

This is basically a healthy breed. Don’t let the list below scare you! Your own dog will probably never have ANY of these problems. These are dog illness and medical problems this breed is prone to that have been listed by various veterinarians at different times over the past decade or so and some pertain to puppies and very young dogs that a breeder would deal with.

The information contained herein has been gathered from numerous books by veterinarians and is intended as general information only. Every dog and situation is different. You must see your vet. Our information is for general interest only and not intended to replace the advice provided by your own veterinarian.

Patellar luxation—Limping, Hind Leg Held Up, Can’t straighten back leg. Caused by an unusually shallow spot on the femur, weak ligaments and misalignment of tendons and muscles that align the knee joint and allow the knee cap (patella) to float sideways in and out of position on the Saint Bernard. This can be caused by injury or be present at birth and can affect both rear legs. It’s most common in small and toy dogs. If your dog has trouble straightening the leg, is limping, or is walking on three legs and holding one hind leg up, look for patellar luxation. Several of my dogs have had the problem and all I’ve done is reach down, massage the knee a little until they drop their leg, and we’re good to go for another 3 or 4 months. Severe cases require surgery for a fully lame leg. 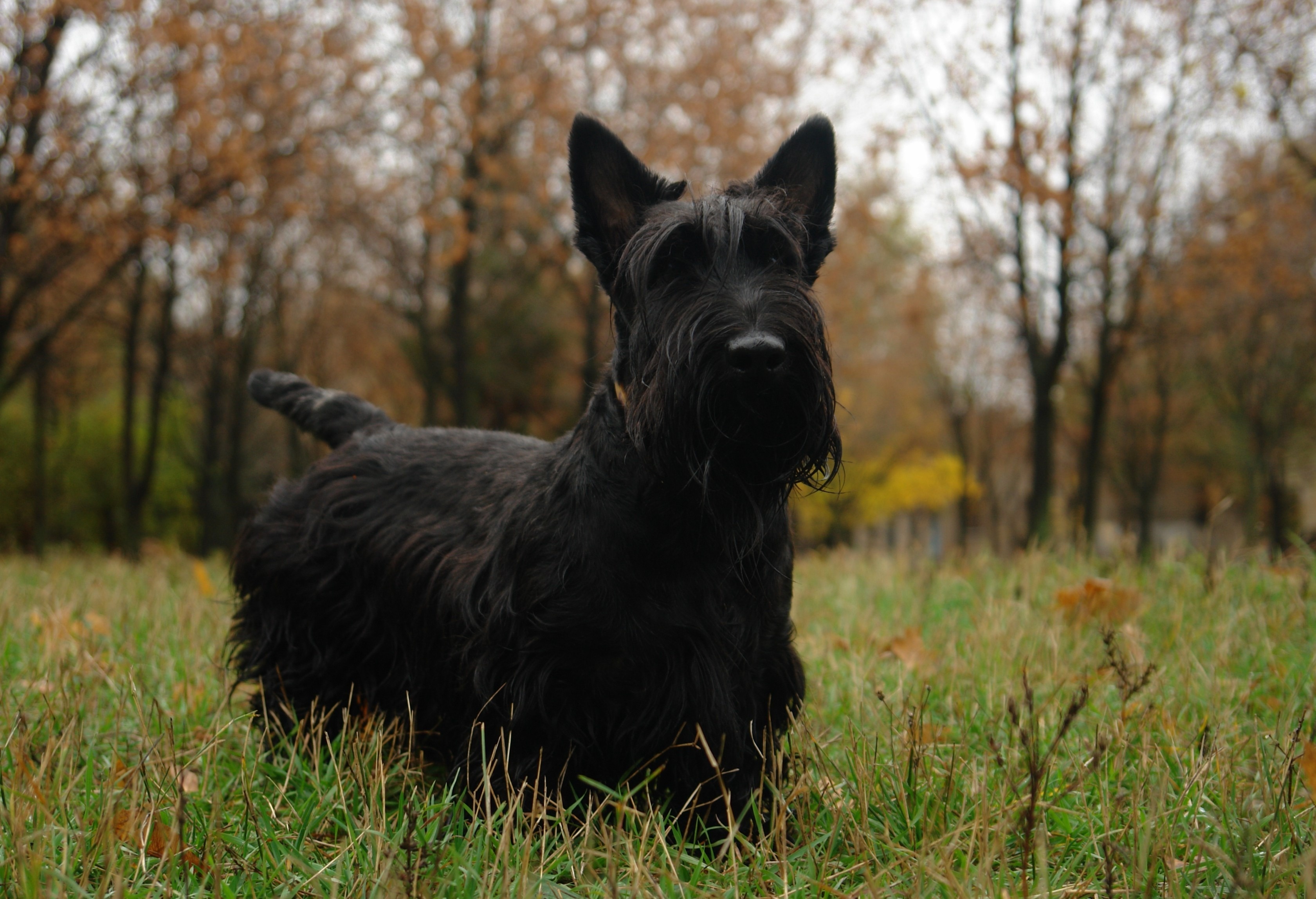 Scottish Terrier – Profile – Medical / Health – The Scottie Info you can use

No comments to show.